Crafting has been passed down through my family from generation to generation, making it only natural that I, too, use it as a creative outlet in my otherwise science-saturated life. While I identify as a knitter first and foremost in my crafting life, the craft that raises the most eyebrows and garners the interest from my peers is taxidermy. Just as my heritage lies in crafts, it also lies in hunting. My Mennonite family still subsistence hunts, but their home décor attests to their delight in having skins stuffed and mounted for proud display. When I was young, my mother always verbalized a desire to stuff animals herself, even going so far as to add a 1960’s book devoted to educating young avid male taxidermists to our library. Family friends donated avian window strike victims to our freezer for the impending taxidermy project, but no project ever came. After a family friend stuffed a grey squirrel for my mother as a Christmas present, it became clear to me that someone in my family was obligated to reciprocate. A few weeks later, a rabbit appeared in the ditch across from my house – killed by a car – and I claimed it for my inaugural project. 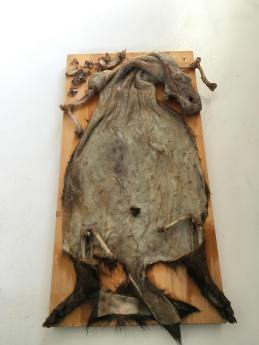 Taxidermy is a two-step process of deconstruction, then reconstruction. After pulling the viscera from the body, flaying the muscles from the bones with a scalpel, and painstakingly cleaning and Borax-ing the thin skin of the carcass, the delicate work of construction began. Using the 1960s book for instruction, I created a new skeleton of wire and salvaged bones inside the skin. To re-create a life like rabbit, I re-fitted the empty skull with eyes from a stuffed animal and filled the body with excelsior before stitching it back together (partial credit for these feats go also to my committed mother and father). I realized during the process that I was not constrained by biology in my re-creation of a rabbit, and mounted wings from a bird in the freezer to its back. Apparently there’s a whole genre, rogue taxidermy, dedicated to subverting the natural form of mounted animals.

The recipient, Liz, was delighted with the end product, almost to the point of tears, and I knew I would one day take up the scalpel once more for a new project. My return to taxidermy came when my mother, walking the dog, discovered a dead mink on the road. She packed it home in a bag to the freezer, and once I got up the determination to start a new project, I successfully transformed the mink into a Christmas tree topper, to the joy and confusion of my extended family.

Taxidermy is the ultimate craft for a biologist – dissection and art rolled into a single activity. Looking back, I am surprised I didn’t realize I was destined career in biology sooner, given my strange passion for this craft form. I began university as a chemist, switching to biology only in my final year. Now, I’m headed for a doctorate, though I study animals without backbones (oysters) that are unfortunately untaxidermizeable.

In my research, I focus on characterizing how climate change will affect our locally farmed species of oyster (Magallana gigas) in British Columbia. Here in BC, rising temperatures and increasing ocean acidity are expected to affect many marine species, though scientists don’t often know exactly how these changes will affect individual species. My current experiment uses the Strait of Georgia in southern British Columbia as a natural laboratory to determine how different gradients of oceanographic conditions such as temperature, salinity, and pH affect the growth, health, and persistence of oysters. From this field-based study, I hope to move into laboratory experiments to understand the mechanisms of any effects I observe. For example, perhaps low pH (high acidity) causes more oysters to die. This effect might be because low pH stresses oysters to the point of death or it might be because low pH makes oysters more susceptible to being killed by opportunistic diseases or predators. In the next three years, I hope to disentangle some of these causes and effects.

Next on the taxidermy agenda – a mobile of dead birds. I suggested to one expecting lab-mate that she could hang this above her child’s crib, but was told this was a rather morbid idea. I’m convinced a more willing recipient is out there.

This is a blog dedicated to scientists and their hobbies. I’m hoping to use this platform to learn more about scientists, researchers, graduate students, and any other -ologists and their research and hobbies. If you are interested in participating please send me a message. There is no standard form of blog posts so please write however you feel.